As air crew were preparing for debarkation, the man, whom the paper described only as “middle-aged,” opened the emergency exit over the port wing, the airline said.

Cold air blew into the plane and an inflatable escape slide was automatically deployed.

Police were called and the man was taken away for questioning, the newspaper report said.

After agreeing to compensate the airline he was released with only a reprimand, the CCTV said.

The incident is the latest in a spate of cases involving Chinese passengers behaving badly on aircraft.

On Saturday, two men were given 15-day detentions after opening three emergency exits on a China Eastern Airlines flight that was preparing to take off from an airport in Kunming, capital of Yunnan Province.
Cliquez pour agrandir... 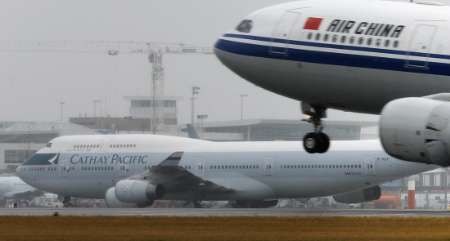 
A bomb alert in the cabin of an Air China flight forced it to make an emergency landing at Chongqing Airport today.

The CA1336 flight from Nanning to Beijing landed at 2pm local time after departing at 12.24pm

A SWAT team was pictured on Twitter storming the plane after it landed.

No suspicious devices were found on the plane following claims from a woman there was a bomb in the cabin of the aircraft. According to one witness, the woman wanted to commit suicide after her boyfriend ended their relationship.

She has since been taken away by police for further investigation. The flight is due to take off again following security checks, China Central Television reported.
Cliquez pour agrandir...

Naha airport was plunged into chaos Monday as an out-of-bounds shopping foray by some Chinese transit passengers caused a security scare.


Authorities at Naha airport in Japan’s Okinawa Island were forced to delay or cancel several flights on Monday following a security scare involving some Chinese transit passengers.
According to My Paper, three female tourists from China ended up in secure airport areas without going through proper security checks.
The women had strolled off looking for duty-free stores while waiting for a connecting flight to Tokyo at Naha Airport in Okinawa.
They wound up in the baggage reclaim area and at the departure gates, the South China Morning Post reported yesterday, citing Japanese newspaper Ryukyu Shimpo.
Following the security breach, the airport police detained the women to conduct an investigation, reports ejinsight.
Authorities also made 6,300 passengers go throlugh security checks again. Some five flights also had to be grounded and 25 more were delayed.
Even passengers who were already seated in planes had to go through another round of security checks, according to a report from Shanghaiist.com on Tuesday.
Most of the flights were said to have been delayed for 2-3 hours.
Some of the airlines which had their flights delayed include All Nippon Airways, Japan Airlines, Jetstar, Pegasus Air, Japan Transocean Air and Ryukyu Air Commuter.
Reports says that the flight which was supposed to carry the three Chinese women to Tokyo’s Haneda airport took off only after 7 pm, against the scheduled departure time of 4.45 pm.
ejinsight added that the women didn’t make it to the flight as they were still under detention.
The incident involving Chinese tourists behvaing badly is not the first of it's kind.
Last month, a flight was delayed for an hour after a passenger opened the emergency door on an aircraft at a Nanjing airport -- because he wanted a breath of fresh air.
In December last year, a plane from Bangkok to Nanjing had to turn back after a Chinese passenger threw hot water at a cabin attendant because she was unhappy with the service provided.
Many netizens in China were outraged by the latest Okinawa airport incident, My Paper said.
Some netizens called the three women an embarrassment to China, the South China Morning Post reported.
Said one person:
"They should be banned from travelling abroad."
Some netizens said the Japanese government should ask China to compensate for economic loss resulting from flight disruptions.
Cliquez pour agrandir...

A Chinese couple and their three-year-old son were forced to get off a Cathay Pacific flight taking off from Thailand after the toddler refused to wear a seatbelt.

An argument then broke out among the passengers on the plane, reports Shanghaiist.

Flight CX654 from Bangkok to Hong Kong was scheduled to take off at 3:15 p.m. on Thursday, but a boy on the plane who refused to sit down and wear a seat belt was causing delays, according to SCMP, citing an Apple Daily report.

His mother insisted on letting the child sit on her lap during the flight even though it's against safety instructions.

A female passenger on board stood up and told the crew to call the police while saying to the couple:

“We are customers too. Why are you allowed to harass the whole flight?”

The father of the three-year-old, however, insisted that if people kept bullying them to get off the plane, they wouldn't leave.

The flight eventually took off 27 minutes late and sans family of three.

Man taken off Shanghai Airlines flight after refusing to leave window seat which was not assigned to him
Posted on 28 February 2015 | 15,025 views | 12 comments

It's safe to say that most people prefer the window seat on a plane.

You get the view, control of the shade and most importantly, you never have to worry about those little drink carts bumping into your elbow as the flight attendants scoot them down the aisle.

But one man flying with Shanghai Airlines yesterday was so determined to get that damn window seat, he was willing to fight for it until getting pulled off the plane in cuffs, reportsShanghaiist.

According to a post on Weibo, the man boarded Guangzhou-bound flight FM9311 at Hongqiao Airport and picked a window seat that he fancied rather than the one assigned to him.

Flight attendants told him to go back to his assigned seat, and so did ground staff. It was of no use. He attempted to reason with the crew that seats should be on a first-come-first-serve basis like on buses.

Annoyed passengers went off on the man and demanded that he be removed from the plane. Eventually, officers from the Hongqiao Airport police station came to take him off in handcuffs.

Meanwhile, the plane, which was meant to take off at 5:30 p.m., ended up being delayed nearly two hours.
Cliquez pour agrandir...