During an ABC News town hall in Pennsylvania on Tuesday, U.S. President Donald Trump once again insisted to host George Stephanopoulos that the Covid-19 coronavirus would just “disappear” even without a vaccine. This time he added a reason why this would occur.

“You'll develop, you'll develop herd, like a herd mentality,” explained Trump. “It's going to be, it’s going to be herd-developed, and that's going to happen. That will all happen. But with a vaccine, I think it will go away very quickly.”

Herd what? Have you herd that correctly? The video accompanying the following tweet from Dena Grayson, MD, shows what Trump said:

Well, that’s interesting. The Merriam Webster dictionary defines “herd mentality” as “the tendency of the people in a group to think and behave in ways that conform with others in the group rather than as individuals.” Is this what they mean when they say that you can do anything that you set your mind to do? Mind over matter?

Before you start wearing what everyone else is wearing just to make the virus disappear, keep in mind that Trump most likely meant “herd immunity” instead of “herd mentality.” The two phrases are quite similar, except for the fact that they mean very different things. Sort of like putting a leash on your dog versus putting a leash on your hot dog.

But Trump probably simply made a verbal goof, you know like Thigh-land (the country in Southeast Asia that’s nowhere near calf-land or butt-land), the 7/11 terror attacks (which had nothing to do with Slurpees), and his wife Melanie. There was also the oranges of the Mueller investigation, unless fruit was somehow involved: 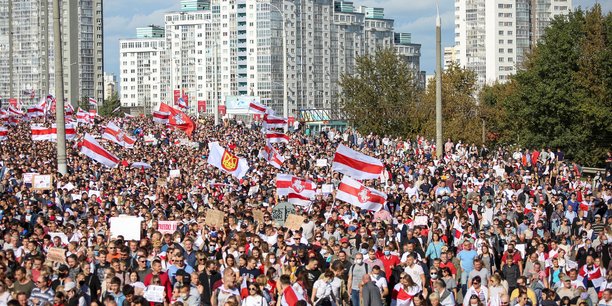 For weeks, Belarus has been gripped by political protests as citizens reject the August 9, 2020, reelection of longtime dictator, Aleksandr Lukashenko, which the international community has called a…

Broadening Understanding of Security Issues Freedom of Information $17,000 To increase access to quality information and analysis on security issues. The program will produce and make available…